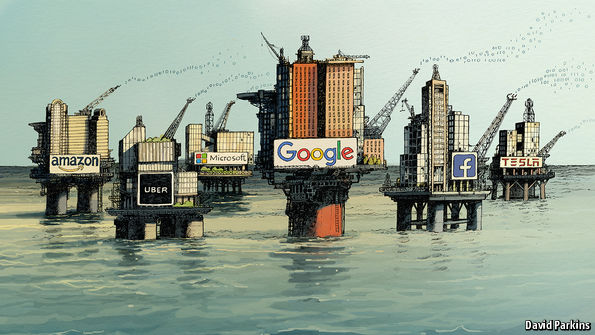 The world’s most valuable resource is no longer oil, but data

The Economist, 2017: "Regulating the internet giants. The world’s most valuable resource is no longer oil, but data. The data economy demands a new approach to antitrust rules. A NEW commodity spawns a lucrative, fast-growing industry, prompting antitrust regulators to step in to restrain those who control its flow. A century ago, the resource in question was oil. Now similar concerns are being raised by the giants that deal in data, the oil of the digital era. These titans—Alphabet (Google’s parent company), Amazon, Apple, Facebook and Microsoft—look unstoppable. They are the five most valuable listed firms in the world. Their profits are surging: they collectively racked up over $25bn in net profit in the first quarter of 2017. Amazon captures half of all dollars spent online in America. Google and Facebook accounted for almost all the revenue growth in digital advertising in America last year.

How to compete vs. bigger Tech Giants?